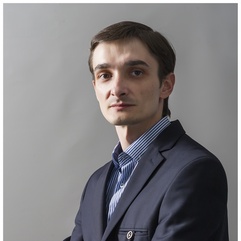 Clarinetist, teacher, Ph.D. (Study Arts and Culturology). He studied clarinet with Gheorghe Storoj at the School of Music in Briceni (1992-1999), and Eugen Verbetsky at the Republican College of Music „St. Neaga” (1999-2003) in Chisinau. After finishing Academy of Music, Theatre and Fine Arts in 2007 (Class of clarinet Aurelian Dănilă), he continued at the postgraduate studies by Master (2007-2009), and Doctorate (2010-2013). He has presented the thesis on the 10 December 2015, the theme The clarinet’s art in the interpretation act of Eugen Verbeţchi, scientific adviser Tcacenco Victoria, Ph.D., the university professor. From 2007 on 2017 he worked at the National Academic Ensemble of Folk Dance „Joc”, from February 2017 he works at the National folk orchestra „Folklore”. Now he works as a vice-dean of the Music Faculty and head of „Wind and percussions instruments” department.

No reviews yet. We offer a money back guarantee if you are not happy with your lesson, so why not try a lesson with Victor?