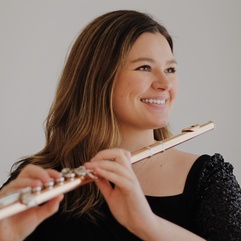 I'm the Associate Principal Flute of the New York Philharmonic. I'd love to inspire and help you achieve your goals on the flute!

Alison Fierst has established herself as a flutist who effortlessly blends brilliant technical ability with a mesmerizing tone. In September of 2019, she joined the New York Philharmonic as Associate Principal Flute. Alison previously held the position of second flute in the Rochester Philharmonic Orchestra.

Following her appointment in New York City, Alison discovered an enthusiasm for music education. In the Fall of 2020, she was invited to join the faculty of The Consummate Flutist Masterclass, a series hosted by her alma mater, the Carnegie Mellon University School of Music. In addition, Alison has given lectures at multiple institutions throughout North America, South America, and Asia. Alison maintains a private flute studio in New York City and online.

Highlights from Alison’s position in the orchestra include touring the world and performing with renowned conductors including Gustavo Dudamel, Jaap van Zweden, and Esa-Pekka Salonen, among others. She particularly enjoyed performing in collaboration between the New York Philharmonic and Lizzo for YouTube’s ‘Dear Class of 2020’. You can hear Alison on the soundtrack for Steven Speilberg’s upcoming remake of the classic movie, ‘West Side Story’.

Your search for a caring, passionate, intelligent and easy to work with flute teacher ends here! Alison Fierst is the best and such a joy to work with. I am an established flute instructor in my local area and reached out to Ms. Fierst when I decided to start taking auditions for graduate schools and professional ensembles. I know what it takes to be a good teacher and Ms. Fierst is the real deal. She is attentive in every lesson, her explanations and demonstrations are easy to follow and don't overwhelm you, she articulates her expectations clearly, and a nice bonus, I think she's funny. These are just a few (out of many) wonderful traits Ms. Fierst brings to her teaching. Since starting lessons with Alison Fierst, I've become more confident in my ability and realize I have a lot of value in my music. Good luck in your search for the right teacher for you!

Alison is an amazing flutist and teacher. Within a very short timeframe she was able to convey invaluable concepts relating to both technical and musical aspects. In addition to that, she is a very accessible and friendly person. I could not recommend her enough!

Along with being an amazing flutist, Alison is also an awesome teacher! I have only been studying with her for a short period of time, but with the amount I have learned, it feels like it has been much longer. She is also kind, friendly, and easy to work with!