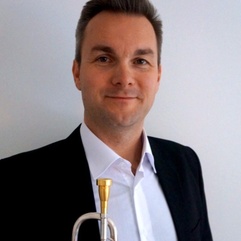 Hi ! My name is Bo. I take great joy and pride in teaching, which I do a lot besides my orchestral work in the Copenhagen and London orchestras.

Bo Fuglsang is considered one of his generation’s most outstanding trumpet players. Praised by the UK Concert Review "Bo Fuglsang´s solo trumpet in Samuel Goldenberg and Schmuyle was little short of miraculous and the whole was topped with a stunning Grand Gate at Kiev", Bo is in demand as one of the most keen principal trumpet players. In addition to his orchestral work, Bo is a trumpet teacher at the Music Academy preliminary school (MGK) in Køge, Denmark. Bo has himself done studies with James Watson, former trumpet professor at the Royal Academy of Music, London, Philip Smith, principal trumpet in the New York Philhamonics and Ole Andersen, former principal trumpet in the Danish National Symphony Orchestra.

Bo gave me a great lesson here at " Play With a Pro" where I played some excerpts for him. He mentioned the importance of rhythmical stability, good tone expression and talked about always playing with a strong musical propose to make the music live the most. I can strongly recommend Bo if you want to get some true inspiration on how to make trumpet playing a little more easy and fun.