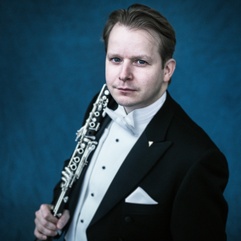 Christian Stene is a Ph.D. Artistic Research Fellow and previously the associate professor of clarinet at The Grieg Academy. He is also the National Chairperson (Norway) for the International Clarinet Association (ICA) and a Buffet Crampon and Vandoren performing artist. Christian was the principal clarinetist of the Bergen Philharmonic Orchestra from 2010 to 2022 and the Norwegian National Opera Orchestra from 2007 to 2010.

A native of Bergen, Christian began playing the clarinet at age eleven. After preliminary studies at The Grieg Academy, he continued at the Conservatorium van Amsterdam to study with former principal clarinetist of the Royal Concertgebouw Orchestra, George Pieterson. Christian then entered the Royal Danish Academy of Music where he completed his orchestral diploma studies with Lee Morgan, principal clarinetist of the Royal Danish Orchestra, in one year. He was further accepted into the soloist class at the Royal Danish Academy of Music as well as the concert class at the Musik-Akademie der Stadt Basel with François Benda. Christian made his debut in Copenhagen in 2007 with the highest mark obtainable. In the 2009/10 season, Christian took a sabbatical to study with Yehuda Gilad at the University of Southern California in Los Angeles.

In addition to teaching the clarinet class at The Grieg Academy, Christian regularly gives masterclasses in Norway as well as in Singapore, Finland, Denmark, Sweden and Belgium. He also coaches The Norwegian National Youth Orchestra and other regional youth orchestras.

Christian regularly appears as guest principal clarinet in various Scandinavian, European and Asian orchestras, notably the Philharmonia Orchestra and London Philharmonic Orchestra. He is also an active chamber musician and often works with composers to create new works for his instrument. In 2015 Christian premiered a commission of a Concerto for Clarinet and Strings by Therese Ulvo with the Bergen Philharmonic Orchestra, which has now been released on CD.

Christian is an amazing teacher and clarinetist! He was my teacher for a year during my bachelor's degree, and I learned so much from him! It is very inspiring working with a teacher on such a high level. He is all about the music and getting all the details perfect. His methods really helped me develop my skills on my instrument. He is definitely the man to go to, if you need help to prepare for an audition or an important concert. I strongly recommend his lessons!

Christian is an excellent musician, who also happen to possess an extraordinary ability to teach. His methods are varied, resulting in highly educational lessons regardless of the student's current level of playing. His eager to constantly improve his own musicianship is also greatly inspiring. He is highly recommended:)

Christian is a very talented teacher and musician. His strengths are the quest for perfection and working in details from fundamental basic and for making music. He never let you of the spot, and he is a great motivation and inspiration for clarinetists to reach and push they're own musical goals. I will highly recommend lessons with Christian!

Christian is engaged, skilful and motivating. A very good combination of fundamental basics and how to make music. He also has experience from virtually everything - opera orchestra, philharmonic and chamber music. As a teacher he is very generous in giving of his knowledge, and I will say that he is suitable for anyone interested in how to improve their skills. Highly recommended!

Christian is a fantastic teacher. After studying around the world he has gathered a lot of teaching experience. He combines the techniques from Yehuda Gilad and Lee Morgan in his basic training, which works very well for music students. He also have a lot of orchestral and opera experience, which is important if you want to play orchestra excerpts for him.

Great teacher and clarinetist! I`ve had several lessons with Christian over the years and I really recommend it. He is such an inspiration to listen to! I also really recommend having lessons on Play With a Pro. The camera and microphone works much better than one might think, so there is no reason to not try it out! I will definitely continue using this as an alternative for live lessons.