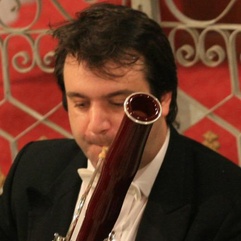 Originally from Santa Fé, Argentina, Eduardo first began playing bassoon with the Orquesta Sinfonica de Niños in his home province between 1986 and 1990. In 1991, at age 16, he went on to study in Buenos Aires with various prestigious professors and was a member of several youth orchestras there. In April of 1997 he obtained the title of ?Profesor Superior de Fagot?. In 1998 Eduardo left to Germany to join the bassoon class of Prof. Gustavo Núñez (Principal bassoon, Amsterdam Concertgebow Orchestra) at the Robert Schumann Hochschule, and earned his diploma with top marks in 2002. After completing his studies in Dusseldorf, Eduardo began his postgraduate studies with Prof. Klaus Thunemann at the Hans-Eisler Musikhochschule in Berlin.
During his student years, Eduardo was an active participant in masterclasses held by some of the world?s top bassoonists: Noel de Vos (Prof. of Bassoon and Chamber Music, Federal University of Rio de Janeiro), Matthew Wilkie (1st bassoon, Chamber Orch. of Europe), Dag Jensen (Bassoon Prof. at the Hannover Musikhochschule), Frank Morelli (1st bassoon, Orpheus Chamber Orch.), Stéphane Levesque (1st bassoon, Montreal Symphony Orch.), Patricia Rogers (1st bassoon, Metropolitan Opera House, NY), Georg Klutsch (Bassoon Prof., Hochschule fur Musik Koln), and Christopher Millard (1st bassoon, National Arts Ctr. Orchestra, Canada).
Eduardo received a UNESCO grant in 1999 for his work in Chamber Music, and was invited to take part in a residency program at the Banff Centre for the Arts in Alberta, Canada, where he presented a series of concerts and classes.
Among his achievements over the years, Eduardo has been awarded 1st prize in the Mozarteum Argentino Competition for Chamber Music, the Fundacion Antorchas ? Argentina, and from the Ministry of External Relations in Germany in the city of Bonn.
Between 1994 and 1998 Eduardo was a member of the Orquesta Sinfónica de Entre Ríos-Argentina; from 2000 ? 2002 he was a member of the Verbier Festival Orchestra in Switzerland, as a regular invited guest with the Deutsche Kammerphilarmonie Bremen, the Kammerakademie Neuss am Rhein, the Orquesta Sinfónica de Galicia and the Orquesta del Palau de les Arts ?Reina Sofia? where he played under conductors such as James Levine, Yuri Temirkanov, Zubin Metha, Kent Nagano, Wolfgang Sawallisch, Paavo Jäarvi, Jesús López Cobos, Lorin Maazel, Ricardo Chailly and Daniel Harding. Eduardo also collaborates with the Ensemble Kontrastes in Nuremberg and the Kammerakademie Potsdam, often directed by Prof. Sergio Azzolini (Prof. of Bassoon and Chamber Music, Superior School of Basel, Switzerland).
Eduardo enjoys maintaining an active and intensive playing and teaching career. He is currently Professor of Bassoon and Chamber Music at the Universidade de Évora in Portugal, and has organised and assisted in masterclasses there with renowned bassoonists such as Ovidio Danzi (1st bassoon, Teatro La Scala, Milano-Italy) and Gustavo Núñez (1st bassoon, Royal Concertgebouw Orch, Amsterdam)
His open disposition to all kinds of musical expression have enabled Eduardo to accept invitations to perform in very diverse genres such as tango and jazz, with world famous artists such as Oscar ?Cacho? Tirao (original guitarist, Piazzolla Quintet), Mercedes Sosa (Argentinean Folk Singer) and Paquito D´Rivera (jazz clarinettist). There have also been a number of bassoon pieces written for and dedicated to Eduardo Sirtori in the last several years. Among them are works by Walter Heinze, Gordon Lawson and Sergio Azevedo.

Professor Eduardo is a great teacher of bassoon. He helped me improve a lot of things I had difficulties . I recommend

Eduardo is an attentive teacher: he offered me many alternatives to improve my mouth, my reeds, as well my technique (sound, attack, articulation ..) His explanations are very clear and has helped me to improving gradually. I recommend it!!