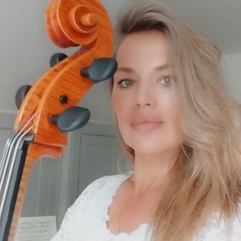 I am a Russian concert cellist, soloist, chamber musician and a recording artist. I have vast experience performing worldwide as well as in Denmark.

I’m experienced in teaching all age groups and abilities. It gives me pleasure to watch young artists develop in a positive way.

Development should be experienced by gaining more technical skills and through greater sensitivity and intuitive understanding of the chosen music.

In my teaching, I emphasise differentiation and take into account the individual student’s views.

I look forward to meeting you.

Eva was born in Tchaikovsky town in Russia, where she started her musical education st age of 6.
From the age of nine she won First Prize in several national competitions.
She studied further at the Moscow Gnesing High School with Prof. Galina Zubareva, under consultation of Prof. Natalia Schakhovskaya.

At the age of eighteen Eva Kochenkova attained the position of Solo Cellist in the Chamber Orchestra “Guido Cantelli” in Milano Italy.

She was then employed as a photo model by the Italian fashion designer Giorgio Armani.

She continued her education as a cellist by studying with Prince Consort Professor of Cello at the Royal Collage of Music in London, Professor in Conservatorio della Svizzera in Lugano, Professor at the Robert Schumann Hochschule in Dusseldorf Johannes Goriziki.

She was then employed as a solo cellist in the “European Music Project” in Germany, the United Europe Chamber Orchestra in Italy, Ensemble Instrumental with George Vassilev (guitar)and James Crabb (accordion) in Sion, Switzerland.

As a soloist and chamber musician, Eva Kochenkova regularly performed at the P&O Sea Music Festival, hosted by BBC presenter Richard Baker and broadcast on BBC radio.
She was also performed with the piano trio with violinist Søren Elbaek and pianist Morten Mogensen. Then as a duet with pianist Morten Morgensen with whom she regularly performs concerts throughout Denmark and Europe.

Eva is a member of Duo Forum with pianist and professor Nino Jvania.

Eva Kochenkova released her Solo CD on the German-Danish label CDklassic, which was award nominated and got the ‘record of the month’
The Strad magazine describes Eva as “… an accomplished artist with excellent vehicle for her sonorous tone and expressivity.”

Eva Kochenkova was honoured to perform for the world renown conductor, maestro Zubin Mehta, who described Eva’s performance as “wonderful playing with a great sense of style.”

Since 2011 Eva has been teaching solo violoncello for various musical institutions.

No reviews yet. We offer a money back guarantee if you are not happy with your lesson, so why not try a lesson with Eva?