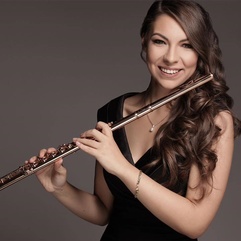 I’m the Principal Flute at Chamber Orchestra of New York with 10 years of teaching experience. I’d love I help you work on your flute skills!

Hailed by the press as “one of the most interesting talents of her generation”, Ginevra Petrucci has performed at Carnegie Hall (New York), Kennedy Center (Washington D.C.), Salle Cortot (Paris), Teatro La Fenice (Venice), Villa Medici (Rome), Ohji Hall (Tokyo), as well as throughout China, South America and the Middle East.

As a soloist, she has appeared in concert with I Pomeriggi Musicali, I Virtuosi Italiani and the Chamber Orchestra of New York, and has released the first recordings of Edouard Dupuy and Ferdinand Buchner’s Concertos. Her chamber music experience has brought her to appear alongside pianists Bruno Canino and Boris Berman, and to a long-standing collaboration with the Kodály Quartet, with whom she has released the highly acclaimed recording of the complete Flute Quintets by Friedrich Kuhlau. Her recording of Robert Muczynski’s Sonata has been praised as “oozing with lifeblood and zest … enthralling and rousing”. In 2017 she has rediscovered and recorded Wilhelm Kempff’s Quartet for flute, strings and piano and toured Italy with its premiere performances.

She has been heard on RAI3 Italian National Radio, and her recital with Jory Vinikour at Myra Hess Memorial Concert Series in Chicago has been broadcast on WFMT. Her feature interviews on the conditions of the migrating artist have been published on the Huffington Post and La Voce di New York.

In 2018, she has promoted the 200th anniversary of flute virtuoso Giulio Briccialdi through the release of the first recording of his four Concertos, where she was described as having “a beautiful phrasing, brilliant virtuosity and a legato worthy of a great singer”. In the same occasion, she has founded the Giulio Briccialdi Online Catalogue, the only existing online platform with full downloadable catalogue dedicated to a flutist composer. Her lectures on Briccialdi and the Romantic Virtuoso Flute Concerto have been hosted by Columbia University, Eastman School, Stony Brook University, the Royal Academy in Dublin, the Chopin Academy in Warsaw, the Paderewsky Academy in Poznan, the Liszt Academy in Budapest, and the Hangzhou University in China.

Ginevra devotes much of her artistic endeavors to contemporary music. At Yale University she has collaborated with George Crumb, Steve Reich, Betsy Jolas and Kaija Saariaho, performing the American premiere of Terrestre. She commissioned Jean-Michel Damase’s last composition, 15 Rubayat d’Omar Khayyam for voice, flute and harp, and she has appeared at the Venice Biennale Contemporary Music Festival with a commissioning project dedicated to Witold Lutosławski. In 2018 she has founded the Flauto d’Amore Project, a large-spanning commission endeavor aimed to the creation of a new music repertoire for the modern flauto d’amore. After the premiere concert in New York City in May 2019, over twenty composers have written, or are in the process of writing new works for the instrument. The next premiere concerts, as well as one-off performances exploring the instrument in different musical styles, are planned for the next three years, as well as residencies and lecture-recitals.

She has curated the edition of over twenty musical editions, including Briccialdi Concertos for Ricordi/Hal Leonard and first editions of works by Mercadante, Jommelli, Morlacchi, Busoni and De Lorenzo. Her book on the history and repertoire of the flute is adopted in several Italian Conservatories as reference text for the Masters programs. Her scholarly articles appear in the Flutist Quarterly, as well as in the leading flute magazines in Italy and France.

She has studied at Santa Cecilia Conservatory in her native Rome with her father, and then pursued her education at the École Normale in Paris. She holds a Master and Artist Diploma from Yale University and a Doctorate of Musical Arts at Stony Brook University.

She is Principal Flute at Chamber Orchestra of New York and Concert Manager at University of California, Berkeley.

I am Japanese student learning flute for almost 6 years now. I am really happy to have lesson online with teacher like Ms.Petrucci. I have done lesson with her for almost 4 month but I am already realizing my skill had improved a lot compared to the past year. Eventually, I became more passionate in playing flute. I am looking forward to my next lesson with her :)