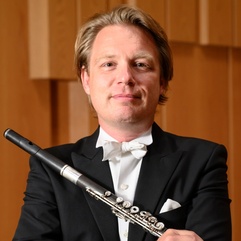 Principal flute of the Münchner Philharmoniker and former professor of flute at Royal Conservatory The Hague and Codarts Rotterdam Conservatory.

Mr. Herman van Kogelenberg was very helpful during my private lesson with him. He explained not only how to play the notes, but also how to show the music in every line and showed me how to add more emotion into my playing. Mr. Kogelenberg also has a lot of orchestral experience and gave me tips for flute and piccolo, as well as general audition advice. Throughout the lesson, he was funny and lively and I highly recommend him for anyone who wants to learn more about playing music on the flute.

I am very glad that I had the opportunity of taking flute lessons for 1,5 year with Herman van Kogelenberg at the conservatory of Rotterdam. He helped me play very natural and I found his musical interpretation very interesting and inspiring. He developed my musical personality a lot, he learn me that the music is always the starting point also in technical things. He gives lessons with a lot of energy, fun and passion. I recommend him as a great flutist and teacher!

Herman van Kogelenberg has been extremely important in my development as a musician. He was a great support by preparing orchestra auditions. He can explain very good how to play the difficult orchestra excerpts because he has a lot of experience in playing in orchestras. He did help me a lot with playing the music very naturally and with express myself as an individual and not a copy of someone.