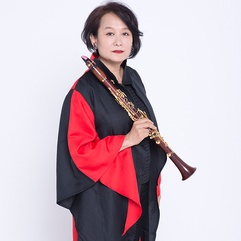 I'm teaching at NY at Purchase, Juilliard, Hartt and am an internationally active performer and founder of NY Licorice Ensemble

Ayako Oshima, winner of numerous international competition including the 55th Japan Music Competition in Tokyo, the Winds and Percussion Competition in Japan, and the 17th International Jeunesses Musicales Competition in Belgrade, where she also received the“Golden Harp” award given to the favorite of the audience and critics, is one of the most popular clarinet soloists in Japan. She performs on a regular basis both in recital and in concerto appearances with orchestra, highlights of which have included performances in Osaka, Nagoya, Kobe, Tanuma, at the Casals Hall, Kioi Hall, and Bunka Kaikan in Tokyo, and with the Hiroshima and Osaka Symphonies. She is quite active in chamber music festivals. Festivals at which Ms. Oshima has appeared include Kuhmo Festival in Finland, the Festival Consonances in France, the Sarasota Summer Music Festival. Ms. Oshima is a member of the noted ensemble “Contrasts Quartet” and playing historical clarinets is a member of the acclaimed period instrument ensemble “Mozzafiato”. Ayako Oshima has recorded for Toshiba EMI, Victor Japan, Naxos, and with “Mozzafiato” for Sony Vivarte. She has recently recorded “Songs of Japan” for the Aurora label and her most recent recording “ Bel Canto” music for two clarinets released 2011 summer. In addition to her performing career, she maintains a high profile as a teacher and is on the faculies of the State University of New York at Purchase, the Juilliard School, and the Hartt School. She has also served on the juries of both the Japan Music Competition and the Japan Winds, Percussion International Competition and the Jacques Lancelot International Clarinet Competition. She has founded and is the Director of the Kita Karuizawa Music Seminar which attracts clarinet students from all over Asia. With her husband, Charles Neidich, she has written a book on the fundamentals of clarinet technique for the publisher, Toa Ongaku Inc. and writes a monthly column on music and the clarinet for Pipers Magazine. In 2011, She also founded the all female Clarinet Ensemble “NY Licorice Ensemble.”

No reviews yet. We offer a money back guarantee if you are not happy with your lesson, so why not try a lesson with Ayako?