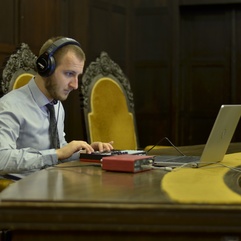 DAVID MASTIKOSA
Born in Prijedor, Bosnia and Herzegovina in 1992, David Mastikosa is a younger generation composer. Mastikosa attended the University of Banja Luka, Academy of Arts where he obtained a Bachelor's and Master's degree. The same Academy elected him a Teaching Assistant in 2015, and later a Senior Teaching Assistant at the Department of Musical Theory and Composition in 2020.
David Mastikosa’s compositions are characterized by unique and distinctive artistic expression. He won several awards for music, most notably the award for the best music for contemporary film, awarded by British Council Ukraine in cooperation with Dovženko-Centr in February 2020. In addition to the award presented by the University of Banja Luka for achieving international results, distinguished work, and achievements in the artistic work, David also won the award of the City of Banja Luka – to the youth for the contribution to the development of the culture of the city.
Following the appearance of David Mastikosa’s music in the international circles, he has been continuously receiving commissions from prominent artists and music festivals. His music was commissioned and performed by artists and ensembles such as: Bartolomej Stanković (piano), Sauro Berti (bass clarinet), Saša Mirković (viola), Andrea Nikolić (violin), Stockholm Saxophone Quartet, Ensemble Metamorphosis, Кalamos quintet, Zagreb soloists, Zagreb flute ensemble, Novosadski duvački kvintet, Banja Luka Philharmony, Brass UL AG, and others. Mastikosa is the author of over 50 different compositions performed at festivals and events across the world, including but not limited to: Dani Vlade S. Miloševića (BiH), Vareš Classic Festival (BiH), Festivalis Druskomanija (Lithuania), AlbaNova (Belgium), CEME (Israel), and Festivalul Internațional de Muzică Nouă Intrada (Romania) .
David Mastikosa is one of the most active film and media music composers in Bosnia and Herzegovina. He is the author of the multiple award-winning documentaries “Lica Lafore” and “Djeca” by Denis Bojić, produced by the Radio Television of Republic of Srpska. In addition to the documentaries, Mastikosa actively writes the music for short and animated movies as well as music for silent archive films. Currently, Mastikosa is in his third year of PhD studies of composition in the class of prof. Aleksandra Vrebalov, PhD at the Academy of Arts in Novi Sad. He is a long-term recipient of the stipend awarded by the Fond “Dr Milan Jelić”.
Mastikosa’s music is exclusively published by Donemus Publishing House of Contemporary Classical Music from the Netherlands. He is also an alumnus of the French talent school Académie musicale de Villecroze. David Mastikosa lives, works and creates in Banja Luka.
For more information about David Mastikosa and his work, including video clips and information about scores, visit https://davidmastikosa.com/

It's definitely my great pleasure to be taking up composition lessons with David. Every lesson, he will always throw in so many ideas that I've never thought of and constantly inspiring me to achieve greater heights! :) Rather than giving me the "fish", he teaches me the methods to catch them and be an independent person. Under his tutelage, I'm now one step closer to becoming a true composer with my own personal voice, always having a goal to achieve in each work and express it with my own signature. Thank you, David! :)