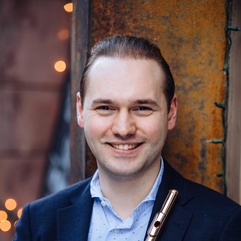 I have 8 years of teaching experience, played with different orchestras and performed as a soloist and chamber music in Europe and America

Praised for his “lustrous tone” (Musical America), Italian flutist Giorgio Consolati is committed to presenting diverse programs showcasing pieces that range from masterworks of the flute repertoire to newly-commissioned works.
Giorgio’s career highlights include performances at the Marlboro Music Festival, Alice Tully Hall, Carnegie Hall, Miami’s New World Center, and the Beijing China Conservatory. He appeared on stage in David Geffen Hall performing Rouse’s Flute Concerto with Alan Gilbert and the Juilliard Orchestra as well as with the National Repertory Orchestra and the Verdi Conservatory Orchestra in Milan. Giorgio has served as principal flutist under the batons of Alan Gilbert, Gianandrea Noseda, David Robertson, and Speranza Scappucci. Passionate about chamber music, Giorgio has performed at festivals such as the Marlboro Music Festival, Avaloch Farm Music Institute, and the Norfolk Chamber Music Festival. He has also performed at the distinguished contemporary festival Milano Musica, where his performances were broadcasted by the premiere Italian classical radio station, Rai Radio 3. While attending Juilliard, Giorgio often collaborated with AXIOM and the New Juilliard Ensemble.
A native of Milan, Giorgio is the first flutist in the Verdi Conservatory’s history to graduate with top honors and honorable mention. He received both his Bachelor and Master of Music degrees at The Juilliard School studying with Carol Wincenc, where he was a proud recipient of a Kovner Fellowship. He has been mentored by Sir James Galway and Marina Piccinini. When not blazing through the flute repertoire, Giorgio enjoys going to art exhibitions, traveling, and trying new cuisines!

No reviews yet. We offer a money back guarantee if you are not happy with your lesson, so why not try a lesson with Giorgio?