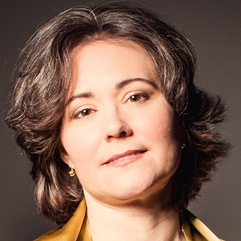 Winning the Gold Medal of the prestigious Indianapolis International Violin Competition of 1998 established Judith Ingolfsson as an international artist of uncompromising musical maturity, extraordinary technical command and charismatic performing style. She regularly appears in the world’s great concert halls including Carnegie Hall, the Kennedy Center, Tokyo Opera City and Konzerthaus Berlin. Her concerts have taken her through almost all of the USA, to Germany, the Czech Republic, Russia, Japan, Hungary, Iceland, Puerto Rico, Panama and Macau. As a guest soloist, she has performed with leading international orchestras including the Philadelphia Orchestra, Saint Louis Symphony, National Symphony (Washington, D. C.), Royal Chamber Orchestra of Tokyo and Budapest Philharmonic under world-renowned conductors such as Wolfgang Sawallisch and Leonard Slatkin.

A graduate of the Curtis Institute of Music in Philadelphia and the Cleveland Institute of Music, her main teachers included Jascha Brodsky, David Cerone and Donald Weilerstein. Prior to her triumph at the Indianapolis Competition, she was also a prizewinner at the Concert Artists Guild Competition in New York City and the Paganini International Violin Competition in Genoa, Italy. Since 2008, Judith Ingolfsson has been Professor of Violin at the Hochschule für Musik und Darstellende Kunst Stuttgart, Germany. She was appointed to the artist faculty of the Peabody Institute at Johns Hopkins University in 2018. She plays a Lorenzo Guadagnini violin, made in 1750.

No reviews yet. We offer a money back guarantee if you are not happy with your lesson, so why not try a lesson with Judith?