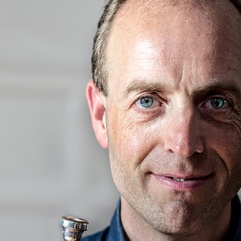 Trumpet player Kristian Steenstrup received his Diploma Exam at The Royal Academy of Music, Aarhus. He has had additional studies at Northwestern University in Chicago with Vincent Cichowicz and studied privately with Arnold Jacobs and John Henes.

Kristian is currently Professor of Trumpet at The Royal Academy of Music in Aarhus, Denmark, where he also published the books Teaching Brass in 2007, Blow Your Mind in 2017 and recorded 2 CDs with Eriko Takezawa, Capriccio and Danish Music for Trumpet and Piano. He holds a busy traveling schedule having done masterclasses in Australia, Israel, Brazil, Taiwan, Japan, Scotland, England, Ireland, France, Germany, Switzerland, Belgium, The Netherlands, Luxembourgh, Hungary, Estonia, Spain, Italy, Finland, Norway and Sweden. Furthermore, he has done workshops with professional orchestras in Norway, Sweden, Scotland, England, Germany and Brazil.

I had a great lesson with Kristian today! Solved a lot of tension problems, learnt a lot of new exercises and I already felt a difference when I practised after! Who knew breathing could be so simple?!

I am a beginner on the flute, having taken it up at the age of 64 upon retirement after a long career. Getting the breathing "right" proved to be one of the most difficult issues that I faced. I found this video to be a revelation - literally. It is clear, direct, and provides practical exercises that have worked for me. If I ever have the opportunity to meet Mr. Steenstrup in person.

Breathing lesson with Kristian Steenstrup makes my playing easier. Now I can make music without thinking about lips. I practise these excercises every day.