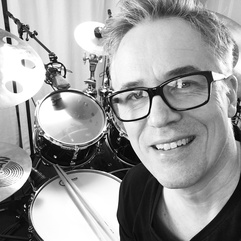 I'm a Danish freelance drummer and drum-teacher. I've been teaching drums for more than 30 years. Let's make you the best drummer possible!

Both as a musician and as a teacher, I go for the best possible whole. And if I can "move" the audience at the concert, or the student of the hour, and at the same time put my own fingerprint on it, it all goes into a higher unit for me.
In 2017 I started the Learn Famous Drum Beats-project, which is video drum-lessons, with pdf's for download. Today I've done more than 50 lessons.
Beside my executive work, playing live and in the studio in Denmark, I have built a reputation as an experienced and committed teacher. I have been teaching since 1993. Both at music schools, and high schools, and at conservatory preparatory courses around the country. In recent years I've also been a censor for several exams at The Royal Academy of Music in Aarhus.

Within both sides of the industry I have my professional focus on satisfying the customer. As a teacher, I focus on how I bring the student along as best as possible. How I keep his ball rolling.
I graduated from The Rhythmic Conservatory in Copenhagen in 1998. But I have been part of the professional Danish music scene since 1988. I have been fortunate to work with many different, competent people, within jazz, pop, rock, fusion and heavy metal. From the Eurovision Song Contest in 1993, several musical / theater productions at the Copenhagen theaters up through the 90s, to television house orchestra participation in DR-TV prime time shows, as well as a large number of tours and recordings. Through my work, I have established myself as a recognized and sought-after musician.

Lars helped my son to prepare for an audition within very short time. And it was a success! My son got accepted to the music school.

Lars is a super teacher! He’s very structured and he’s planning the teaching according to one's wishes. (E.g. jazz, beats, you name it) At the same time however, you also get through all the ‘have to’-stuff, such as technical exercises and coordination. He has very good explanatory skills and good analogies that makes you understand e.g. what a buzz-roll is. He’s also good at linking the exercises with "real music". For example, by designating albums and drummers that can be checked out. All the teaching takes place in a good mood and with a great balance between respect for the drumming, and self-irony about the same!

Lars is a competent and experienced teacher as well as executive musician. His vast experience base allows him to help you with just what you need. I have had great benefit from the dialogue in the teaching, which has helped me to focus and work with the right things at a high professional level.