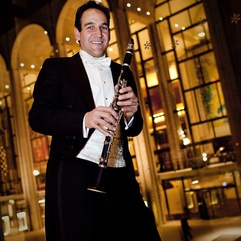 Hi I'm Mark and I'm Principal Clarinetist of the Houston Symphony (formerly NY Phil) and hope to help you be a better clarinetist.

Critics have praised clarinetist Mark Nuccio for his solo, orchestral, and chamber appearances, describing him as "the evening's highlight", full of "mystery and insight" and "shaping his phrases beautifully with a rich, expressive tone."
(NY Times)

Mr. Nuccio joined the New York Philharmonic in 1999 as Associate Principal and Solo E-flat Clarinetist and recently served as Acting Principal Clarinet with the New York Philharmonic for four years from 2009-2013. Mr. Nuccio will assume a new role in the 2015-16 season as he has accepted the position of Principal Clarinet with the Houston Symphony Orchestra and will serve for ten weeks during the 2015-16 season while continuing his professional obligations with the New York Philharmonic. In the 2016-17 season, Mr. Nuccio will play full time with the Houston Symphony Orchestra. Prior to his service with the Philharmonic, he has held positions with orchestras in Pittsburgh, Denver, Savannah, and Florida working with distinguished conductors such as Lorin Maazel, Kurt Masur, Mariss Jansons, Riccardo Muti, Zubin Mehta, Erich Leinsdorf, Alan Gilbert, Claudio Abbado, Riccardo Chailly, Andre Previn, Christoph von Dohnanyi, and Gustavo Dudamel. Additionally, Mr. Nuccio has toured extensively with the New York Philharmonic and the Pittsburgh Symphony Orchestra in numerous countries, recorded with both orchestras, and performs regularly with the Philharmonic on the award-winning series, Live from Lincoln Center, broadcast on PBS. Recent highlights include the Philharmonic's historic and newsworthy visits to North Korea and Vietnam.
You can also find me on facebook here: https://www.facebook.com/mark.nuccio.3

No reviews yet. We offer a money back guarantee if you are not happy with your lesson, so why not try a lesson with Mark?