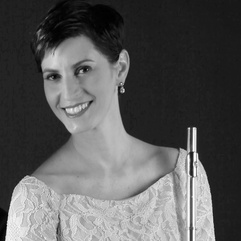 Hi. I'm Nina, The Internet Flutist. My teaching reflects the French and American methods, and builds artistry by developing your confidence!

Nina Perlove is an award winning classical flutist who is in high demand as a performer and clinician worldwide. She has been the Featured Guest Artist for the Texas, Arizona, and Oklahoma Flute Societies, for the Northern California flute summer program at Hidden Valley Music Seminars, has appeared at universities throughout the US and regularly performs and teaches at the National Flute Association Conventions. She is one of the most listened to flutists of her generation with over 8 million online views to her video lessons and performances. She was one of the earliest classical music adopters of real-time webcam music lessons and YouTube, and was featured on the Oprah Winfrey Show. She was a winner of the 2009 YouTube Symphony Competition at Carnegie Hall and worked as a consultant for YouTube on the 2011 YouTube Symphony, performing and hosting classical music events throughout Sydney, Australia.

I love studying with Nina. Her virtuosity and enthusiasm makes her a fantastic teacher and such a joy to work with. She makes every aspect of practicing interesting, fun and worthwhile. My playing has improved leaps and bounds in just a few short months working with her. I encourage any serious flute player to take some lessons with her

I 've had years of lessons given by what I thought were good teachers. all competent performers. None was able to explain the nitty gritty of flute playing like Nina. I always felt that If I didn't "stumble" onto the right technique I would never make it, and I never did. With Nina, I know what to do to progress and succeed. Thank God and thank Nina!

I have been searching for 35 years for a technique of sound production that works. No one would tell me, not even the late great M. Rampal, who said in an interview with someone, ‘There are no secrets, just hard work.’ Well, there are secrets, it turns out. Your video on sound production has supplied the answer. I feel like Jason having just been given the Golden Fleece by Aphrodite herself!...I cannot thank you enough for spilling the beans. Please accept my sincerest thanks.

In my opinion Nina is not only one of the best flute players in the world, but she knows how to communicate and to teach. She knows how to make the complicated understandable.

For many days, I've been depressed. Because I've been told to do things the opposite way of you. And I've played for something about 7 years....But when I saw your video here, I tried it, and it worked! I'm happy, really! Because I've learned more about actually playing, of the twenty minutes I saw you, than in my seven years....Thank you