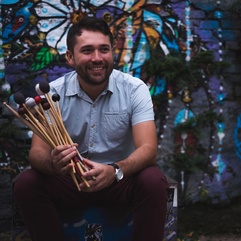 I'm Percussionist of São Paulo Symphony Orchestra - Osesp - and I'd love to help you get better as a musician.

Rubén is one of the most prominent percussionists of his generation. Born in Santiago of Chile, he is currently a member of the São Paulo Symphony Orchestra (Osesp), Percorso Ensemble, Escualo Ensemble and Zúñiga/Wenzell Percussion Duo.
He studied at the University of Chile with Rodrigo Kanamori and Patricio Hernandez and at the Hochschule für Musik und Theater München, in Germany with Alexej Gerassimez, Raymond Curfs and Claudio Estay. He also participated in the Alan Able Percussion Seminar at Temple University and took lessons with Tom Freer, Christopher Lamb, Markus Rhoten, David Friedman, Tom Greenleaves, Wieland Welzel, Ernst-Wilhelm Hilgers, Simone Rubino, Robyn Schulkowsky, among others.
He has played in the main concert halls such as Concertgebouw, Berliner Philharmonie, Royal Albert Hall, Salle Pleyel, Grosses Festspielhaus Salzburg, National Centre for the Performing Arts of Beijing, among others. Before his current position, he was the principal percussionist of Minas Gerais Philharmonic Orchestra, percussionist at the Concepción Symphony Orchestra, and percussionist/timpanist at Youth National Symphony Orchestra of Chile.
As an guest musician, he has performed with the Das Symphonieorchester des Bayerischen Rundfunks, Die Bayerische Staatsoper, Die Deutsche Kammerphilharmonie Bremem, Camerata Salzburg, Das Georgische Kammerorchester, and others.
As an active advocate of the contemporary music, Rubén has worked together with renowned composers such as Thomas Adès, Magnus Lindberg, Alexandre Lunsqui, Heinz Holliger, Helmut Lachenmann, and several pieces have been written or dedicated to him. In 2008, he won the Youth Talents Prize of Concepción Symphony Orchestra and also won the Second Prize in the “International Mock Audition” – Pasic 2009 (Indianapolis-USA). He has performed in festivals such as BBC Proms, Campos do Jordao International Festival, Dvorák Prague Festival, Rheingau Musik Festival, Audi Open Konzert, Lucern Festival, Musica Viva München, Hong Kong Arts Festival among others events in Argentina, Brazil, Chile, Cuba, Denmark and Germany. As a soloist, he has performed with Osesp, Concepción Symphony Orcehstra, Ouro Preto Orchestra, Orquestra Experimental de Repertório and Heliópolis Symphony Orchestra.
Rubén is international artist of Zildjian, Black Swamp Percussion and
Vic Firth. He regularly gives masterclasses and clinics in Latin America, United States and Europe.

More about Rubén in: www.rzpercussion.com

In the period of 4 years having lessons with Rubén I acquired a very solid, basic and consistent technique, that allowed me to understand and increase my musical objectives higher than my expectations. Rubén, unquestionably, is one of the best percussionists, musicians and teachers of music that I know.

I am a big admirer of Rubén’s work. He is an incredible percussionist and a great teacher. He has a great didactic with a long extension of knowledge and knows how to demonstrate everything he tries and explain to the student"

Rubén is an extremely competent and dedicated teacher. In my lessons, I started to realize and get control of the musical instruments with much more consistence and security, becoming a well prepared percussionist.

I studied with Rubén Zúñiga for approximately one year and a half and as it might seem a short period of time, he helped me to develop all the virtudes that a percussion student needs throughout the musical journey.

I had lessons with Rubén for two years and it is unbelievable how much I learned and improved in such a small period of time. He helped me to comprehend my mistakes and gave me tools to fix them. His approach to technique, sound, time and musical character are extremely refined.