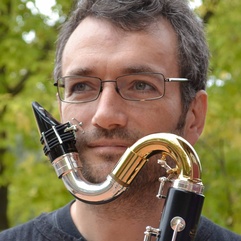 Bass clarinet at “Teatro dell’Opera di Roma”. I will send for free a copy of "Venti Studi" or "Tuning" to each students after their first lesson

SAURO BERTI, bass clarinet of the “Teatro dell’Opera di Roma”, has collaborated with the most important Italian orchestras (Teatro alla Scala, Maggio Musicale Fiorentino, RAI National Orchestra), the Royal Scottish National Orchestra, the Sinfonia Finlandia Jyväskylä and the Thailand Philarmonic Orchestra. He has played under G.Prêtre, R.Chailly, M.W.Chung, R.Muti, W.Sawallisch, V.Gergiev, L.Maazel, P.Boulez and Z.Mehta. He participated in the DVD of Mozart’s “GranPartita” under M°Muti.
He was a soloist at the Tokyo ClarinetFest2008, the last seven ClarinetFest®2009-2015 (Porto, Austin, LosAngeles, Lincoln, Assisi, BatonRouge, Madrid), the 2nd CostaRica Festival, the 1st and 2nd Peruvian Congreso Latinoamericanos, the 5th “Congreso de Madrid”, the Festival Guimarães 2012, the 3rd Guatemala Festival 2013 and the “2015 China International Festival”.
In 2009 he obtained his conducting diploma with D.Renzetti.
He has published “Venti Studi per Clarinetto Basso”, “Tuning” for winds (Suvini Zerboni), his version of V.Bucchi’s concerto and the CDs: “Suggestions”(Edipan) and “SoloNonSolo”(ParmaRecords).
SB. is a Rico Artist and plays on Buffet Crampon instruments, Selmer mouthpieces and Silverstein ligatures.

I had a lesson with Sauro about a week before a professional audition I was taking place. Thanks to him, I was able to rethink how I was working on some of the bass clarinet excerpts on the list, especially in regards to some technical and stylistic aspects. A week later, I found out I got the job! I would highly recommend Mr. Berti to anyone in the midst of audition preparation, and I thank him again for helping me achieve a big career goal.