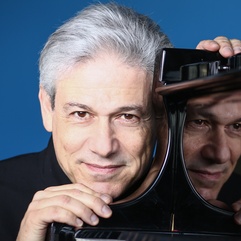 As a performer with a variety of experiences, I have had the privilege and opportunity to develop many different interests and passions over the years. I have performed extensively worldwide as guest soloist, with orchestras such as the Berlin Philharmonic Orchestra, the Gewandhaus Orchestra Leipzig, the Symphony Orchestra of the Bavarian Radio and the Konzerthaus Orchestra Berlin. I have collaborated with conductors including Christian Thielemann, Michail Jurowski, Marek Janowski, Leopold Hager and Günther Neuhold. As a recitalist, I have appeared at Berlin’s Philharmonie and Konzerthaus, Hamburg’s Grosse Musikhalle, Leipzig’s Gewandhaus and Dortmund’s Konzerthaus, as well as at a number of piano and chamber music festivals. As an educator, I have maintained a private piano studio for over 30 years in Paris, New York and Berlin. My main focus has been on helping young pianists prepare for auditions and competitions, as well as mentoring young professionals at the beginning of their performing careers. I have also enjoyed the many master classes I been invited to give, often in association with my performances in Europe, China, Iceland and the US. I have also had experience serving as Artistic Director of a number of festivals, including the “Jewish Cultural Days” and currently the “Last Rose of Summer” in Berlin as well as the Festival “Aigues-Vives en Musiques” in Aigues-Vives, France, where a large component of my activities also includes teaching both the solo piano and chamber music repertoire.

I have studied with Prof. Stoupel for several months now and am very thankful for his guidance, whether in preparation for performances or working on extremely demanding pieces.. His musical approach has challenged my own way of thinking and eased my technique to the point of not feeling overworked anymore. He has dispelled previous notions I had on technique in general, and my own specifically. His hearing is unforgiving and in consequence I have become more demanding of my own tone quality and sound production. He is not someone who wastes time showing off to the student by playing for most of the lesson, but is extremely meticulous and aware of what needs to be accomplished. He is both a demanding and caring teacher who provides you with the tools for self exploration and pushes you to what you can accomplish. You will feel exhausted after a lesson, and rightly so. I am very grateful to him to be sharing his knowledge and experience.

Audition went well I think! Thank you so much for the help and guidance these past few months.